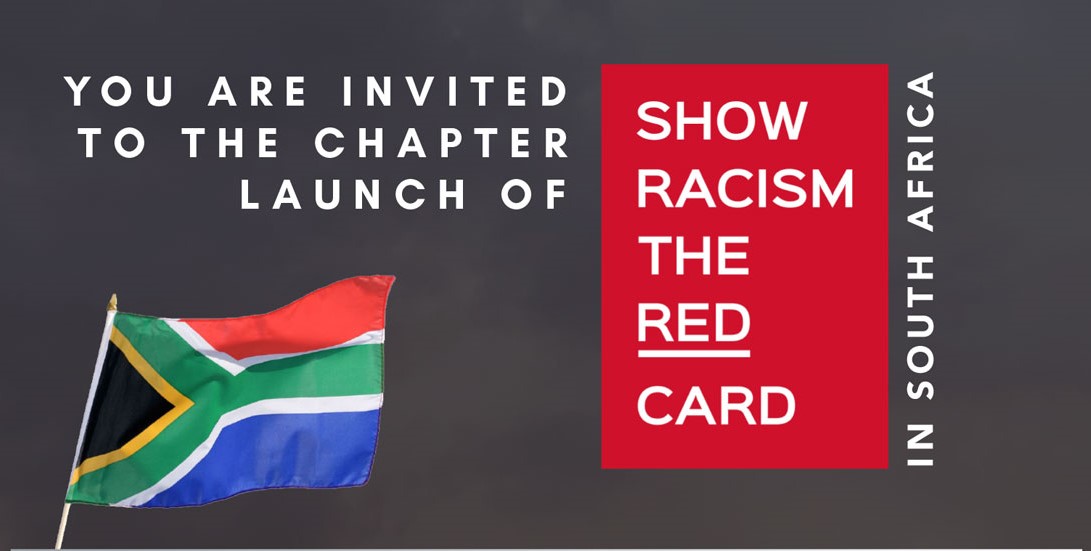 The UK’s largest anti-racism educational charity, Show Racism the Red Card (SRtRC) will, on Thursday, 28 January 2021, launch a country chapter in South Africa in partnership with the Ahmed Kathrada Foundation. The organisation’s presence in South Africa will add to its already established footprints in England, Scotland and Wales.

In their twenty-five years of existence, Show Racism the Red Card has been able to reach over 825,000 people within the UK to deliver anti-racism education. Training methods cut across films aimed at challenging racism in the workplace, to awareness building on hate crimes and equality training. Every October, SRtRC hosts its annual Wear Red Day campaign, which is a national day of activism urging members of the public to stand up against racism. The Ahmed Kathrada Foundation also backed up this call last year.

The South African launch will take place online, via the Zoom platform and broadcast live to the Ahmed Kathrada Foundation Facebook page as well as the Show Racism the Red Card Facebook page & YouTube channel at 16:00 SAST (14:00 GMT).

Since its establishment in 2008, the Ahmed Kathrada Foundation has facilitated anti-racism work in the country through programmes in schools, workplaces and several sectors of society including grassroots activations. Building on their individual strengths, the Ahmed Kathrada Foundation and Show Racism the Red Card have collaborated to take forward anti-racism work and to amplify the call for an end to racial discrimination.

SRtRC CEO, Ged Grebby said, “We are excited to be working with the Ahmed Kathrada Foundation to launch Show Racism the Red Card in South Africa. We are now in our 25th year and have worked with several different organisations throughout the world in this period. However, we have never had a sister organisation in the African continent and we believe that this is a great development”

“South Africa has a central role in the historic movement against racism. The anti-apartheid movement inspired a generation of anti-racism activists in the same way the current Black Lives Matter movement is radicalising a new generation of anti-racists. Show Racism the Red Card looks forward to working with the Kathrada Foundation to help build a strong section of SRtRC in South Africa.”

SRtRC Chairperson, Tosca Fairchild echoed this by saying: “Over the past year we have seen the historically monumental rise of a global movement in the fight against racial discrimination. George Floyd’s horrific murder at the hands of law enforcement shocked, horrified and awoke the world to the very presence of and devastation caused by systemic racism. This was further highlighted by the difference in the treatment of Black Lives Matter protesters marching in the aftermath of George Floyd’s murder to that of Trump’s heavily armed supporters storming the Capitol Building. This global awaking to systematic racism and the realisation of just how deep rooted it is has injected a renewed energy in so many ways to our organisation as we enter our 25th year. In this context I feel it is only fitting that we are now also entering in to this partnership. It gives me great pleasure to be launching our campaign in a country steeped in a history of struggle and progress ,that still to this day continues to inspire generations of anti-racists, alongside such a renowned foundation that continues the dedicated work of a giant in our movement in Ahmed Kathrada.

To quote the words of the great Nelson Mandela “No one is born hating anyone because of the colour his skin, or his background, or his religion.  People must learn to hate, and if they can learn to hate, they can be taught to love, for loves comes more naturally to the human heart than it’s opposite”

And with this partnership and our educational programmes, we believe we are giving the young in particular, the keys to unlock that which comes naturally to the human heart.  Love for the human race