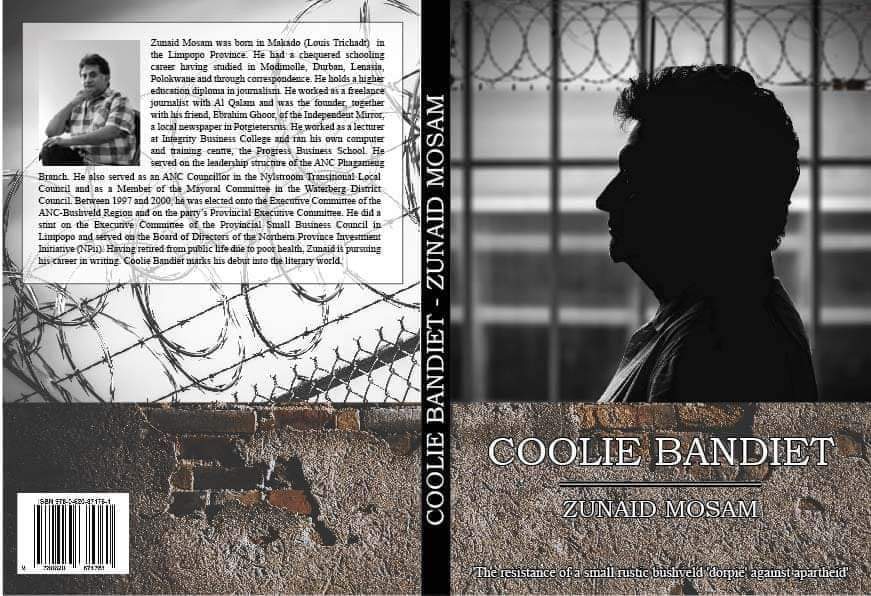 Afzal Moolla’s “Struggle, Exile & Love” and Zunaid Mosam’s “Coolie Bandiet” are new additions to the growing collection of literary books in prose and poetry reflecting on life under apartheid and the struggle of oppressed people against a racially unjust, discriminatory and undemocratic system.

Afzal is a young, gifted South African poet. Born in exile in Delhi in the early 1970s, his poetry and reflective writings capture the broad contours of our struggle for national liberation. It’s not just what he says but how he says that stirs the imagination. It is his play on words and velvety descriptions of things tangible and intangible that uniquely reveal the depth and character of our freedom struggle.

The anthology deals with elements of the global struggle against apartheid, the dislocation and sadness of life in exile, the heavy price countless numbers of fellow South Africans have paid in the liberation struggle and the remarkable qualities of leaders who have led – and died – during the struggle.

It is not always that a novel is published by an anti-apartheid activist from the rustic platteland. Living in the dorpie of Nylstroom, now known as Modimolle, Zunaid Mosam provides a snapshot of the racialised nature of life in a typical country town under apartheid, and of a people’s resistance to it.
In that struggle, Zunaid is detained without trial for three months in the mid-1980s under the state of emergency declared by the former apartheid President, PW Botha. He vividly describes his arrest, detention and interrogation by the security police. Being subjected to solitary confinement for some time, and in an absurd and surreal way having time on his hands, he reminisces about his upbringing and his community’s daily struggles against apartheid.
In doing so he applies a literary technique of recalling events from his prison cell of his personal, family and community life over a century. In his world the “community” is not the racially constructed “Indian” community under the Group Areas Act, but the broader community of Phagameng and Nylstroom in the erstwhile Northern Transvaal. Coolie Bandie is largely anecdotal. It’s a composite of personal and family history, and social and community history.
Both Afzal and Zunaid are rebels at heart. The former is always with the poor and defenceless in society. His poems reflect critically on the fault lines of poor governance and anti-revolutionary social norms and values in the post-apartheid period. His vehemence is aimed against the redolent culture of greed that is evident in the political and economic elites of society, state capture and the abuse of political and administrative power. The latter rebelled against the racist education system, the authoritarianism of some of his teachers, and the disciplinary codes of schooling. But his spontaneous instincts of challenging racial discrimination were gradually transformed into more considered opposition to and activism against apartheid. Zunaid’s politics traverses the traditions of the Black Consciousness Movement, the Pan Africanist Congress and the African National Congress.
Poetry in Afzal’s hand is a weapon of ideological – possibly even philosophical – warfare. There is little room for neutrality or silence. In his world, words are the voices of the oppressed, the dispossessed, the helpless and the defenceless. In “Coolie Bandiet”, Zunaid describes the complexities of establishing a new model of local governance in Modimolle and the reluctance of representatives from the White community to change with the times.
For both writers, life and revolution is an on-going and ever-changing process. They express their disappointment with corruption in government and the capture of the state by unscrupulous private interests that serve to strengthen their resolve to fight on in the revolution. It is this resolve that leaves our generation with hope. The Ahmed Kathrada Foundation is honoured to publish the books of Afzal Moolla and Zunaid Mosam.
(Copies of the book are available at the office of the Ahmed Kathrada Foundation at Signet Terrace, Lenasia – Struggle, Exile and Love, R120 and Coolie Bandiet, R200)