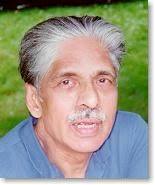 Mr ES Reddy will stand out in the annals of history as one who dedicated most of his adult life to supporting action against the oppressive system of apartheid; working tirelessly in support of the liberation movement; forging an unshakeable bond between South Africa and his homeland, India; and meticulously recording aspects of the struggle history of South Africa.

Born on 1 July 1924 to a politically active family in Andhra Pradesh, India, he was named Enuga Sreenivasulu Reddy.  His grandfather was imprisoned for three months in 1941 for an act of individual satyagraha; and Mr Reddy was influenced by the heroes of the Indian struggle against the British Raj, Jawaharlal Nehru and radical ideas.

His interest in South Africa dates to the 1940s in India and continued when he went to the United States in the mid-1940s to study at New York University.  Shortly thereafter, he went to work full time for the United Nations in New York for 35 years until his retirement. From 1963 to 1984 he was the UN official in charge of action against apartheid, first as principal secretary of the Special Committee Against Apartheid and then as director of the Centre against Apartheid.  He was assistant secretary-general of the UN from 1983 to 1985.

It is in this role that Mr Reddy distinguished himself as an implacable foe of the apartheid system, working tirelessly to mobilise support of member states and strongly lobbying for comprehensive sanctions against apartheid.  He spared no effort in seeking recognition for South African liberation movements and earned enduring friendships with key figures such as Oliver Tambo, president of the African National Congress and Dr Yusuf Dadoo, chairman of the SA Communist Party and vice-chairman of the ANC-led Revolutionary Alliance.

Upon his retirement in 1985, he spent many years meticulously researching and writing the history of the South African liberation movement and its leaders, United Nations action against apartheid, anti-apartheid movements and campaigns, and relations between India and South Africa.

He has been recognised for his contribution by many organisations and countries around the world including the World Peace Council; award of the Padma Shree, one the highest civilian awards by the government of India; and the prestigious Companion of O.R. Tambo, national award from South African Government in 2013.

Although Mr Reddy is not a household name in South Africa, he is remembered by legions of leaders and activists of the liberation movement with whom he had established close, comradely relationships.  The late Ahmed Kathrada invoked his name when speaking about the international campaign of solidarity with the people of South Africa during its long and difficult struggle.  Equally, historians and other researchers rate his insight, knowledge and scholarship on his area of interest as incomparable.

At a personal level, many Board members and activists associated with the Ahmed Kathrada Foundation have established and maintained long and wonderful friendships with a committed and brilliant yet self-effacing individual.

Mr Reddy, we wish you all the best in your “retirement from retirement”! A very happy 96th birthday with your wonderful family and keep safe during these unprecedented times! Amandla! A salute to you from the Ahmed Kathrada Foundation and the people of South Africa!