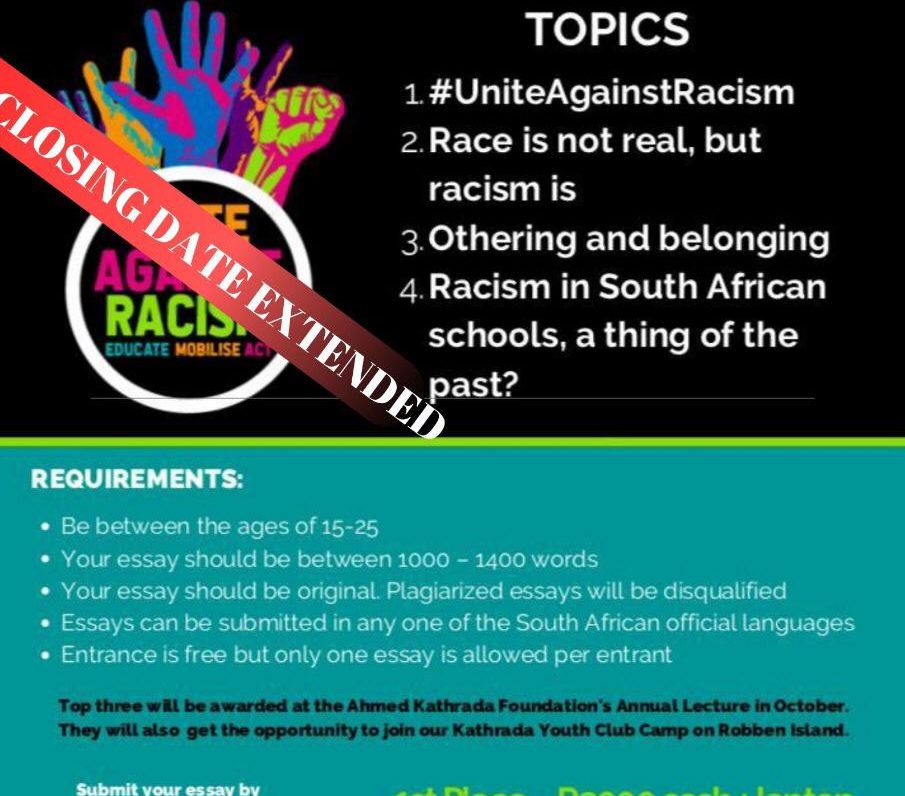 Young people wishing to take part in the Ahmed Kathrada Foundation’s Annual Youth Essay Writing Competition Against Racism will have until Thursday, August 22 to apply.

This comes after several requests from young people who have been asking for an extension of the closing date for the writing competition.

The competition officially closed on Wednesday, July 31 but will now see entries being accepted until August 22 to accommodate late submissions.

Jessica Mofokeng from the Ahmed Kathrada Foundation says that since the competition was announced, the Foundation had received more than 200 entries from young people across the country. “Based on the submissions we have received already, it is clear that young people are concerned and are already talking about the issue of racism. Through their submissions, we are delighted that the youth have taken the initiative of articulating their thoughts in some of the South African official languages.

“Young people have engaged with the Foundation and we have listened. Informed by their growing interest in the competition, we have decided to extend the closing date beyond the original deadline to include those who could not submit in time,” said Jessica.

The top three, who will be announced at the Foundation’s Annual Lecture series in October will also join the Kathrada Youth Club participants when they embark on a leadership camp to Robben Island later this year.

Anyone between the ages of 15-25 years can take part in the competition, by writing on any of the following topics:

Write ups should be from 1000 to 1400 words and should include a final word count. Each essay should clearly indicate the participant’s name and surname, their chosen topic, age, their postal address as well as a contact number that the essay writer can easily be contacted on.

Essays need to be original. Plagiarised essays will immediately be disqualified.

Applications must be submitted via email to youth@kathradafoundation.org or via post, to P.O. Box 3240, Lenasia, 1820. Essays can also be hand delivered to the Foundation’s offices: Signet Terrace Office Park, Block B, Suite 2 – 19 Guinea Fowl Street, Ext 1, Lenasia, Johannesburg.

For more information, contact the Ahmed Kathrada Foundation on 011 854 0082