Time to define our struggle

The notion that our country is a fully transformed rainbow nation and that we all are able to live in harmony and enjoy our freedoms is proving to be a fallacy.

On the one hand we’re faced with navigating a turbulent socio-political sphere and on the other we’re faced with growing concerns around economic development and inclusion. These inter-linked issues that we face stand to have massive impacts on our progression as a country in the international arena and on attempts to further social cohesion nationally.

While all these issues affect the collective South African society, it is the youth that will bear the brunt of the outcome.
On the first anniversary of Freedom Day in 1995, Nelson Mandela delievered a speech at the Union buildings in Pretoria and across the country masses had gathered to celebrate the anniversary of the first democratic election in 1994. In his euphoria-laced speech, the first democratic president speaks of past hardships, overcoming oppression and the continuation of work to ensure that the dream of a just society is realised.
One particular sentence from Nelson Mandela’s speech that embodied the importance that the day carried read, “If any one day marked the crossing of the divide from a past of conflict and division to the possibility of unity and peace; from inequality to equality; from a history of oppression to a future of freedom, it is 27 April 1994.” While ‘Freedom Day’ did indeed mark a distinct cross over from a past riddled with racial division, hatred and brutality, today, racial inequality remains a stain on our democracy.
We have already marked Human Rights Day, Freedom Day and Workers Day this year. However, the celebration of these days are clouded by the undeniable fact that concerns are growing in the country, and that many South Africans feel restrained by poor economic and social conditions and are therefore not as ‘free’ as we would like to believe.

We are celebrating another historical public holiday this week which marks one of the greatest milestones in the South African liberation struggle, Youth Day. As a millennial, this day is quite important to me personally, firstly because of its political and historical importance and secondly because it’s a day of reflection. It’s a day where young people like myself and others recount the atrocities committed in the past and applaud the bravery of the youth of yester-year.

Yet is also a time that we can reflect on contemporary struggles fought by young people and on the responsibilities that lie on our shoulders and we shape a future South Africa. This is a month that should encourageall young people in this country to introspect and really question what our generational struggle is and how we plan to conscientise and mobilise young masses to join in.
The Fees Must Fall cadres shook the country and put youth voices at the forefront. With the use of social media to inform and radicalise those who were not in political circles, student leadership mobilised support and this is example of the type of mass mobilisation we should be engaging in the struggle for social justice. With exception of the violence that ensued in during Fees Must Fall protests, the model and message was brilliant and clear for all to hear.

As young people we have the responsibility to ensure that we consistently fight all the societal ills that we face, using historic public holidays and the platforms that come with them as microphones to showcase what we are doing throughout the year and make the country take notice.

During Youth Month, as much as I will commemorate the ‘76 generation, I will also be remembering the cadres that stood bravely in the face of teargas, police harassment, private university security, disciplinary hearings and said, “We will not be intimidated”. These cadres initiated the first leg of our generational struggle, the fight for access to tertiary education.
In this month, my message to my fellow young people is that we have the freedom to shape our country by using our voices, ideas and the right to vote. While repeated failures and shortcomings by those who have put self-aggrandisement above the needs of the nation continue to shape society negatively, we should never underestimate the fact that we have the power to bring change. We have the power to determine our destiny and for as long as we have this power, we must rejoice and accept the responsibility of using it to effect real change for those who continue to live in poverty, for those who have no houses or jobs, for those whose human rights are treated with disregard and most importantly, for those who will inherit this country centuries from now. 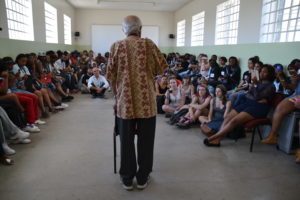 * Kabelo Kemp is part of the Ahmed Kathrada Foundation. He writes in his personal capacity.