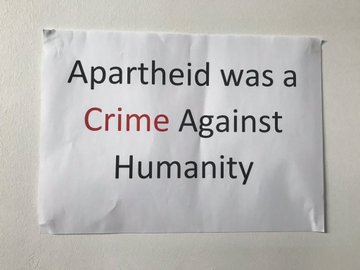 FW de Klerk Foundation must recognise the injustices of the past

At the launch of Anti-Racism Week 2020 in Sharpeville today, the Ahmed Kathrada Foundation’s Executive Director, Neeshan Balton, expressed dismay at the callous remarks made by former President FW de Klerk and his foundation.

The de Klerk Foundation had last week issued a statement supporting its founder’s view that apartheid was not a crime against humanity.

“We note this apology, but are extremely concerned that the foundation did not realise the insensitivity of the statement. The fact that the foundation only withdrew its statement after widespread condemnation from individuals and organisations is very problematic. We need to get to a point where empathy trumps over ignorance,” Balton said.

Balton stated that apartheid was declared a crime against humanity because it was exactly that. “It was inhumane and the disastrous impact that it had on millions individually and collectively is an undeniable fact.

“The consequences of forced removals, separate and unequal education systems, job reservation systems and many more aspects of this brutal system impacted on and destroyed the lives of millions of South Africans There was nothing ‘grey’ about the crime of apartheid. That it drew so strongly from Nazi policies to entrench white supremacism in a way that brutalised the lives of Black people cannot simply be called ‘grave injustices,’” Balton said.

“The de Klerk’s Foundation’s attempt to downplay its founder’s comments was either as a result of ignorance of what apartheid really was for Black people, or was rooted in some erroneous belief that opposition to it was nothing but a grand Soviet conspiracy. Either way, it has done untold damage to all who have gone out of their way to be cordial in their relationships and associations with the de Klerk Foundation.”

He added, “The de Klerk Foundation had indeed attempted to whitewash the effects of apartheid through references to deaths during the 1990-1994 period, saying that more Black people died then compared to the period that preceded it. It was an attempt to detract from the complicity of the apartheid government in the violence.  One should not have had to remind the de Klerk Foundation that it was the apartheid government and its association with various homeland organisations and right wing groups that instigated this violence.”

Balton stated that the Ahmed Kathrada Foundation was compelled to speak out against the initial statement even though while still alive, struggle veteran Ahmed Kathrada defended de Klerk when there was debate about renaming a street after him.

“Kathrada would have been appalled at the utterances of de Klerk and that of his foundation.   He was firmly opposed to anything that amounted to an inaccurate representation of the true nature of apartheid and which sought to legitimise elements of the system and those who propped it up.”

Balton reflected on the Preamble to the Constitution of South Africa, which calls on all South Africans to: “Recognise the injustices of the past, honour those who suffered for justice and freedom in our Land …”

“The de Klerk Foundation and its founder would do well to read and internalise the content of the Preamble and engage South Africans on how best it could execute the calls made by this important document,” Balton said.

This morning, Balton shared these sentiments at the launch of the Anti-Racism Week 2020, which was organised by the Anti-Racism Network South Africa (ARNSA). This is an alliance of civil society organisations interested in tackling racism nationally. The Kathrada Foundation is one of the founding members of the network and has been part of its secretariat since inception.

Note: Neeshan Balton wrote to the de Klerk Foundation Board Chairperson, Mr Dave Steward on the 15 February 2020, to convey the sentiments expressed in this statement.