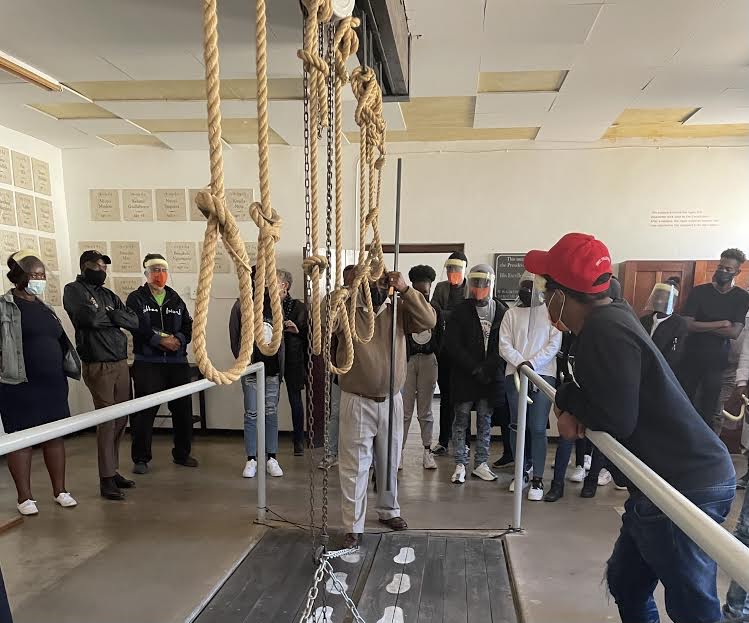 The ropes that tied the future and now-Bongani Masanabo

The Ahmed Kathrada Foundation’s Youth Day event in Pretoria was for me an eye opening experience. Under different circumstances, no one would have anticipated going to the gallows, unless driven by a sense of conviction. Imagine having your last meal, expected to down it knowing that the next day would be your very last sunrise.

A mere tourist, it broke my heart walking through the autopsy room and seeing the type of indecent coffins used at the time to place some of the lifeless bodies. Seeing the ropes that cut between body and soul, I could not help but reflect on the fact that our fallen soldiers fought a good and noble fight. Political chants, the hippo, teargas, constant running, heavy breathing, hiding, life of exile, the shootings, dogs tearing terrified flesh, sjamboks, lamentations, broken families and friends lost is what I remember from the stories shared with me by my parents and grandparents.

As I walked into the cold gallows room at Kgosi Mampuru II Correctional Centre formally known as the Pretoria Central Prison, my eyes met a list of unsung heroes whose blood had shed, nourishing the tree that bore the fruits of freedom that we enjoy today. I cannot help but recall the words from the famous play Sarafina, “make me numb Nelson” as this for many of us is the closest image to see and feel the mood of that time.

As a youth myself I am disgusted by how we’ve turned June 16 into a festival of dressing in pimped school uniforms, taking to the streets with glasses filled to the brim with alcoholic beverages, having to walk back home in the dead of night – drunk. Solomon Kalushi Mahlangu left us with these words “…they must continue the struggle.” Do not get it wrong, he did not say continue to struggle.

However, we have a different struggle today as the youth. Limited access to institutions of higher education and training, growing unemployment, limited access to public resources and a threat to our democracy are amongst others. This can be attributed to young people not playing an active role in their different communities, holding the government and politicians accountable. It is time we demand a seat at the table for our generation will be soon grow old and what then would we have accomplished? This placed my thoughts in a corner, I chowed on the last bone in my thoughts… was it all worth it, did they fight a good fight, was this the freedom they fought for?

After taking the 52 steps and
seeing the 7 ropes looped, I still ask myself how long are we going to suffer under the oppression of corruption, if this was the sacrifice for us to have freedom. It cannot be that the only voices that mourn the dead were the silent tears of families deprived of viewing their loved ones in those coffins one last time. Our freedom was not free, as Ahmed Kathrada would often eluded to.

Our freedom came at a great cost. Seeing the ages 18, 22, 24 got
me shivering, thinking of the trauma these families went through. As a 20-year old, the way has been paved for me to fight for social justice, economic freedom, defend our democracy, and restore human dignity. I choose to stand for calls to end violence against women and children, to fight the brutality of the police towards the marginalised people when voicing out their concerns.

The Union Buildings, like its name united the young people of the various Ahmed Kathrada Foundation Youth Clubs in Johannesburg and Pretoria, to pay homage to our many heroes. This made me see the potential we have as a unit, if we can meet to commemorate Youth Day, there is more we can achieve together beyond our differences of race, gender, language, sexual orientation and disability. Today, 45 years later should be a wake-up call for young people to take their rightful places and practice active citizenship. I am concerned at how many have made a mockery of our fallen brothers and sisters, instead of using their ultimate sacrifices to fuel the fire in themselves to seek social justice and build a
legacy for the next generation that follows us.

The Vulindlela brothers, all five hanged at the same time are among the many unsung heroes probably looking down on us with teary eyes, broken hearts and utter disbelief. If it were in a boxing ring, the past versus now, the now would fall in shame, disgust with wounded souls of what we’re doing. The past is marked in the books of history, however, that ink is fading.

*Bongani is a second year student at the University of Pretoria pursuing a BA Law degree. He is an active member of the Kathrada Youth Club aimed at bringing change in the Atteridgeville
community.