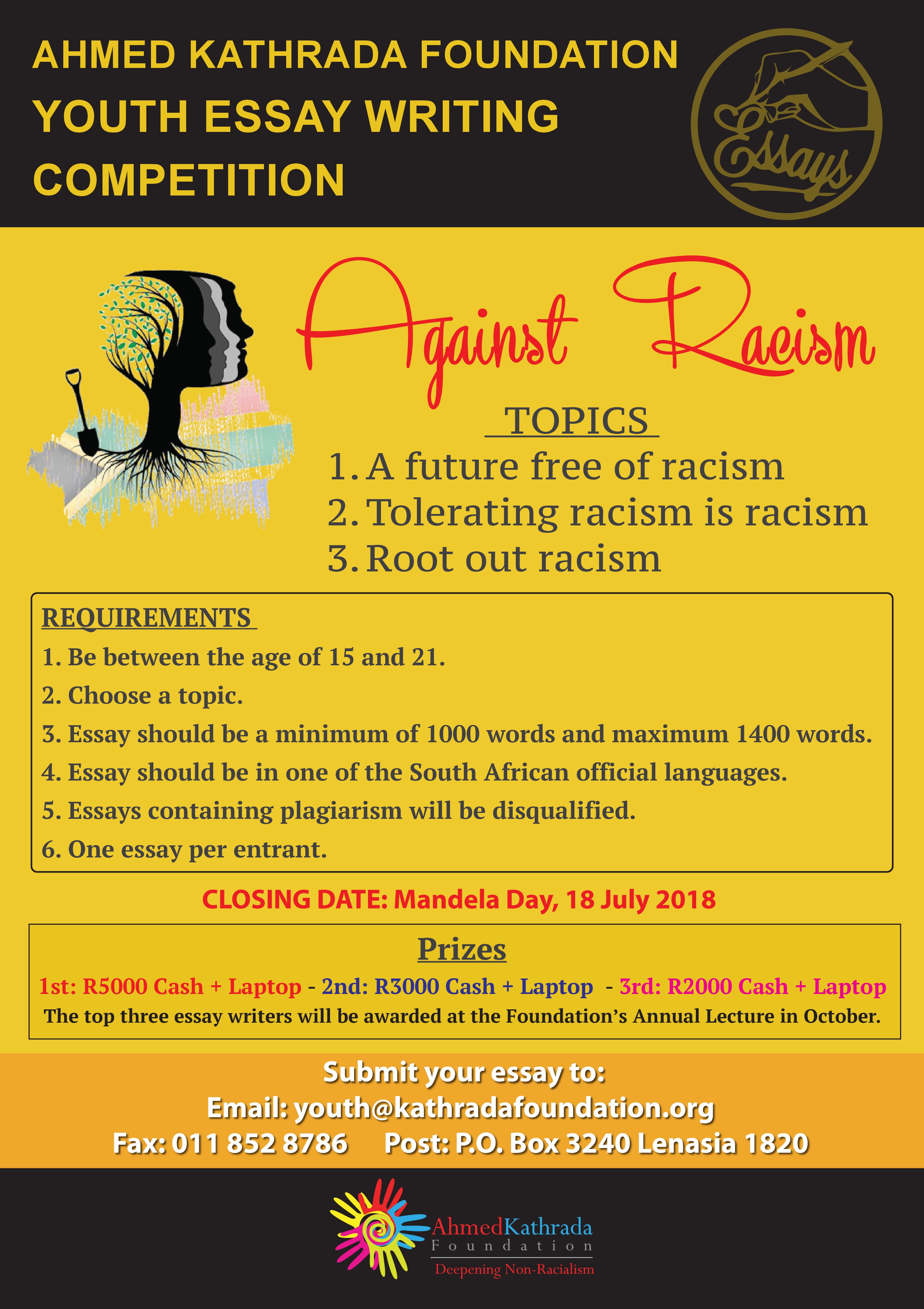 The closing date for the essay writing competition has also been extended to Mandela Day, 18 July 2018, marking Madiba’s centenary.

Topics for the competition remain: A future free of racism; Tolerating racism is racism; and Root out racism.

The cash prizes, sponsored by the Foundation, were included as an additional incentive for young people to participate in the competition.

“We hope that the laptops would be a valuable resource which the three winners can used for school or university work, or to develop their writing skills. The winners can determine how best to use the cash prizes themselves,” said the Foundation’s Executive Director, Neeshan Balton.

Speaking about the importance of young people sharing their thoughts on racism in post-apartheid South Africa, Balton said, “Apartheid, colonialism and slavery have had an immense impact on the psyche of the nation. It certainly affects current day experiences and perceptions of diversity and race in the country. South Africa’s youth were born in a country free of legislated apartheid and were dubbed the “born-frees”. However, this does not mean that racism, or the negative impact of apartheid, has ended.”

Balton provided several examples of racial incidents in the last few weeks alone in South Africa, “Just recently, a Pam Golding properties agent was called out on social media for declining to rent out a property of a white client, supposedly because the client only wanted white people renting their property. Then we had the incident involving actor Rajesh Gopie, who referred to violent soccer fans at the Nedbank Cup semi-finals as “baboons”.  There was also the case of business executive Mark Lamberti, who referred to an ex-employee as a “female employment equity candidate”. We’ve also read reports of investigations into allegations of racism at UNISA, and more recently, we’ve seen a video of former Springbok player, Ashwin Willemse, alluding to racial issues within the sport.”

Balton added, “In our quest to deepen non-racialism and make a meaningful contribution towards working for society free of racism, sexism and discrimination, we hope to involve young people in the fight against these problems. We aim to, through the essay writing competition, give young people a voice and a platform to articulate their views on matters that are undoubtedly key to our progression as a country and as a continent.”

Entrants must be between the age of 15 and 21 years. The essay should be a minimum of 1000 words and maximum 1400 words and can be in any one of the South African official languages. Essays containing plagiarism will be disqualified. Only one essay per entrant is allowed. For more information, contact Dawood Raphalalane on 011 854 0082.