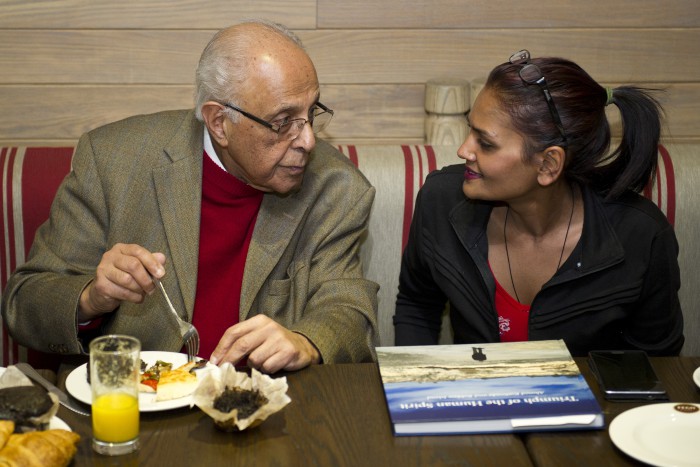 Anti-apartheid struggle veteran Ahmed Kathrada would receive many interview requests from journalists around the world. There were so many during his lifetime that it would be difficult to sometimes remember the journalists making the requests by name.

But, we remembered Yadhana. We first came into contact with her in June 2014 when she requested to do a profile interview on Kathrada. It took months to secure due to a Kathrada’s busy diary, but Yadhana was both persistent and patient.
Eventually, she conducted the interview, capturing not just the ‘usual stories’, but the little details of Kathrada’s life that made him the relatable person  that he was. The article, which can be sourced online on The Citizen’s website will tell you not just the details of Kathrada’s character, but in the way it’s written, about the journalist who took the time to record simple, yet important aspects of the struggle icon’s life – aspects that made him human.
And it’s not just Kathrada that Yadhana did this for, but other struggle icons as well including Sophia Williams de Bruyn, leader of the 1956 Women’s March.
Yadhana became a regular at events hosted by the Ahmed Kathrada Foundation. We once hosted a press enegagement event in Lenasia regarding the launch of a new publication. Many did not see the event as being very newsworthy and we were concerned that national media would not attend at all. We were pleasantly surprised, and hugely relieved, when Yadhana attended. It was after this event that she wrote about Kathrada: “You see, it’s in these instances we are told about in life from those left around us, that we should listen, absorb and apply into a bigger scheme of life. The message rang clear yesterday that: we are all human.”
In remembering Yadhana, we must emphasise the important role that journalists play – these are the people who indeed take the time to ‘listen’ and ‘absorb’ from ‘those left around us’ and convey meaning to those of us who don’t have the time or opportunity to do so.
These are the women and men, who work around the clock just to tell stories, in the process often risking their lives.
Yet these are stories that not only document and preserve our past, but that shape our future.
More recently, Yadhana would contact the Foundation and the Future SA coalition that we’re part of, almost every week for comment around issues related to state capture. She kept us on our toes, but in doing so, ensured that members of civil society were often given an opportunity to articulate their views on issues related to state capture and corruption.
Today, as we remember Yadhana, we must laud the contribution of journalists throughout the world who through their reporting have defended the ideals of freedom, democracy and access to information by simply doing their work.
As we remember Yadhana, we must remember Suna Venter from the SABC 8 who passed away last year,  the journalists killed in a bomb blast in Afghanistan just a few days ago, and the Palestinian reporters on Gaza border who have been targeted by Israeli snipers.
Just as journalists have taken the time to tell our stories, as we mourn Yadhana today, we hope that people here and and the many who would have read her articles throughout the country, will take the time to reflect on her story: the story of a young journalist who had so much to offer our young democracy.
Tags Ahmed Kathrada, Future SA coalition, journalist, Sophia Williams-De Bruyn, Suna Venter, Yadhana Jadoo