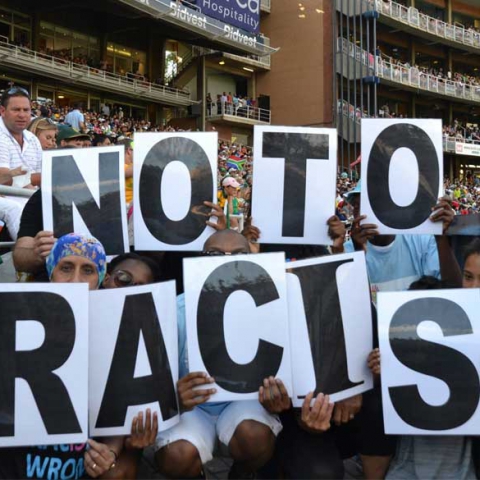 The Ahmed Kathrada Foundation is deeply concerned by a video made by Kessie Nair which went viral yesterday. In the video, Nair unashamedly and repeatedly refers to President Cyril Ramaphosa as a “kaffir President”.

The Foundation’s Executive Director, Neeshan Balton, said, “We condemn this despicable utterance, which is an attack on the dignity of all South Africans, who are represented by the President of the Republic. Furthermore, this case is of particular offence to the Foundation. President Ramaphosa served as the first chairperson of the Ahmed Kathrada Foundation Board for his commitment to non-racialism. He served at the specific request of Ahmed Kathrada.

“Irrespective of the grievances that people may have about the country, or any other situation, using racist vitriol, hate speech, or dehumanising any person irrespective of his or her position, is unacceptable and cannot be allowed as a method to draw attention to issues,” Balton said.

“More disturbing, is that Nair’s rant is just one among many recent racist incidents that have taken place in South Africa. It is deeply concerning that racists still feel comfortable demeaning others with hate speech publicly and blatantly without any fear of reprisal. We reiterate that racism is not only unacceptable, it is illegal,” he said.

“I don’t think that racists understand the type of social instability and tension that their racist views have the potential to unleash. It takes one racist incident to spark a situation that can become uncontainable and can wreak havoc on a society that is still deeply scarred by apartheid.

“There is an urgent need for all sectors of society, including family units, to not only ensure that racism is continually challenged, but that policies are developed to take immediate action against racists. So, for instance, businesses and schools should adopt anti-racism policies, and families need to discuss what their stance will be against relatives who clearly harbor racist views. Each one needs to start tackling the problem from within their own circles.”

Balton added, “On that note, the Nair family should be commended for their rapid condemnation of their relative’s racist rant. Ordinary people should be applauded for calling out the racism on social media. We also commend the South African Human Rights Commission for their swift response to the issue and for indicating that they will be investigating the case. Furthermore, we welcome the quick action by Councillor Brandon Pillay in opening of a case of crimen injuria against Nair, so that the relevant prosecuting authorities can act on this racist action.

“While we are aware of questions regarding the mental health of Nair, this case cannot be handled differently, and must still be adjudicated by legal authorities. It is the role of professionals appointed by the Courts to advise if mental health had an impact on Nair’s actions, and if so what the appropriate punishment, rehabilitation and treatment is required.”

Balton however indicated that all of the recent cases of racism should “prompt us to question what does society expect of racists after an incident like this has occurred”. “The judiciary certainly has an important role to ensure that racists are penalised or jailed, and that racism is made ‘expensive for racists’. However, society needs to deliberate about what they would like to be seeing racists do as part of the rehabilitative process as well. Should racists simply issue an apology, or should they undergo anti-racism training as well? Should they be made to do community service as part of their sentence, or should they be made social pariahs for a long period of time? These are issues that we should be discussing. We also need to be addressing what proactive work needs to be done on a day to day basis to shift mindsets and change deeply entrenched racial views, as well as systemic racism.

“The Foundation, as part of the Anti-Racism Network South Africa’s secretariat, will be calling on speakers at this year’s conference to address what should be the ‘pathways to anti-racism’. Based on ideas from this conference, the organisations present would be able to develop and build on concrete steps that can be taken to address these issues.”